After extensively conducting research into the various Chaga products that are available, I now personally endorse only one, Wildcrafted Siberian Chaga . In fact, because this particular product is so pristine and nutrient dense, I am now on a personal crusade to ensure the health benefits of this exceptional formulation of wild Chaga realized right here at home.

The process of determining the best formulation of wild Chaga drops took over four years of rigorous scientific research conducted in alliance with the Women and Cancer Fund at an expenditure of about $3,000,000. In total, this research included over 2,000 participants and resulted in the Wildcrafted Siberian Chaga.

Wildcrafted Siberian Chaga is superior to other available Chaga products for several reasons. First, it is extracted from only the highest level of graded Chaga sourced from the forests of Siberia. This wild Chaga has been allowed to grow for 20 years in a symbiotic relationship on birch trees in the Siberian Mountains of Russia. As previously discussed, the 20 years growth cycle is necessary to harvest the most nutrient dense raw Chaga. Even when harvested from the wild, Chaga has various grades according to its nutritional density. Wildcrafted Siberian Chaga is formulated from only the highest grade of Chaga. Chaga not meeting the highest standards are rejected. Importantly, the standards for Chaga quality are measureable by equipment, such as Far infrared spectrometers and magnetic resonance analysis. Thus, the nutritional density of chemical composition of Wildcrafted Siberian Chaga compared to other versions of Chaga is known. The figure below shows the energy encapsulate in Wildcrafted Siberian Chaga in comparison to other chaga and nutraceuticals products. Some products are shown as a range based on various samples. 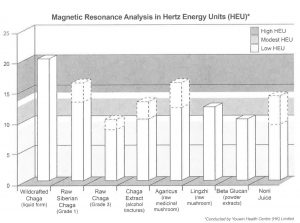 Third, the process used in the manufacturing of Wild Siberian Chaga ensures that none of the nutrients are lost, no toxins are introduced, and the nutritional contents are easily absorbed. Use of short–cut extraction techniques, such as using alcohol, which destroys a large portion of the antioxidants and energy level, and the inclusion of preservatives, are NOT part of the manufacturing process of Wildcrafted Siberian Chaga.

To determine the best way to manufacture Wildcrafted Siberian Chaga, extensive testing was done to determine the correct temperatures, pressures, extraction time, and water quality to use in the formulation process to keep all natural powerful melanins, beta glucans, and super antioxidants from being inactivated, damaged, or denatured in any way. The process using advanced low pressure, low temperature vacuum separation techniques takes more time and is more expensive than typical, but the outcome is well worth the expense. This manufacturing

process insures that all of the precious properties, melanins, and super antioxidants from the high grade wild Chaga remain intact. Because Wildcrafted Siberian Chaga is preservative free, refrigeration after opening a bottle is recommended. Likewise, unopened bottles should be stored in temperatures under 80°F and 45% humidity.

Last, Wildcrafted Siberian Chaga is formulated using purified, activated (i.e., energized) water. Energized water is found deep, over 1,000 meters under the earth. This water vibrates faster and aids in faster absorption of the product as well as rapid expulsion of toxins that are in our bodies.

The synergistic effect of this naturally perfect formulation of nutrients makes wild Chaga responsible for the potent positive impact on improving and maintaining the health of systems throughout the body. There are few, if any other, nutritional sources which offer as many diverse benefits as wild Chaga. Indeed, a food source that can both protect and regenerate the body is extremely rare. Wild Chaga is just such a super food. It not only protects the body from oxidation, infection, and toxins; ensures cells and tissues are strong; and modulates immunity and metabolism; but, also repairs DNA, heals degeneration, causes apoptosis, and slows aging. All of these things, of course, lead to increased quality of life and longevity.

Wild Chaga has been used in Russia, Poland, and several other eastern European countries for literally hundreds of years and has remained virtually unknown in the Western hemisphere, except to a few highly interested people and practitioners of holistic medicine, naturopathic physicians, and those with an interest in Chinese and Russian medicine. There are over 400 peer reviewed scientific articles that have been published about the multiple benefits of Chaga or its constituent parts. Since 2006, the carefully formulated Wildcrafted Siberian Chaga has been available in the East, including China, South Korea, Indonesia, and Japan, with amazing benefits for those who use it. Now, this formulation is being made available in the USA

There are currently various Chaga teas, powders, and other Chaga products available in the USA. Most have preservatives, and many have had toxins introduced during the extraction process. While these products probably provide some benefit, they are not the same as what was used by the Siberian natives that often lived into their 100s in very harsh cold climates. Unlike these lesser Chaga products, Wildcrafted Siberian Chaga meets the highest quality standards, providing the results that people need and expect. By sourcing the highest quality Chaga from

the sub–freezing Siberian climate and using a proprietary manufacturing process based on four years of costly research to ensure the ideal formulation, Wildcrafted Siberian Chaga is the best Chaga available in the world.

I first became aware of Wildcrafted Siberian Chaga during a time when I had a serious and ongoing upper respiratory infection. After five months, multiple tests, and several consultations with my medical colleagues, it was finally determined that I had a “super virus.” This was an infection that my body‘s own immune system simply could not overcome and western medicine could not defeat. It was not until I began to take Wildcrafted Siberian Chaga that my symptoms began to improve and were completely resolved within two to three weeks. That was about two years ago from this writing. At that time, I became a true believer. In the ensuing two years, my energy, stamina, vitality, and sense of well-being have only increased. Today, I won’t travel without my Wildcrafted Siberian Chaga. Now, I want to share this precious gift with the rest of the world.